MARINES ACTIVATED TO ARREST 120,000 US LEADERS

UNITED STATES MILITARY HAS RECEIVED AN ORDER TO DEPLOY WITHIN USA TO ASSIST CIVIL AUTHORITIES!!!!

MARINES ACTIVATED TO ARREST 120,000 US LEADERS 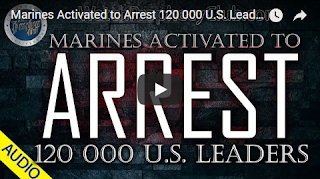 I just posted this very important program with confirmed information.

As you recall the prophecy from Terry Bennett said:

I saw in the governmental arena we will go through a dramatic change in our government and there would be a time of anarchy and chaos. For a while we will have a fractional government, which means basically our government will come down to the state level because of the military stepping in and having to seize control of our federal government. We would call it a coup, but in all honesty it will be to help our nation.

That is why the military will step in. Lawlessness and chaos was shown to me, and civil unrest."

"When the checks from our government stop coming to the people the chaos will ensue."

There will be a change in the U.S. currency. A different currency is going to come, at least one. That will entail us no longer being the reserve currency of the world. -TERRY BENNETT

Conservative radio talk show host Rush Limbaugh said Friday that America is in the middle of a "Cold Civil War" and that President Trump is on the "cusp" of exposing corruption on Capitol Hill.

"The media is not media. It's just Democrats who work in the media, and the whole group of 'em is aligned. And what we are in the middle of now, folks, is a Cold Civil War," Limbaugh said on his radio show.

U.S. headed for civil war as military mobilizes to take down cabal

The United States is headed for full-blown civil war or revolution, as the U.S. military has now mobilized troops and reserve units "to take down the Deep State," Pentagon sources say. "With 125,000 indictments, many will be unsealed, making for a bloody October revolution or October surprise before the satanic Halloween holiday." They note that "Melania Trump wore red on October 1 to signify Red October for a new fiscal year as the military mobilizes troops to defend Trump."

The mobilization order can be confirmed on the U.S. Marines' own home page:

The order authorizes Marines and other U.S. military units to take action inside the U.S. if "a Governor requests Federal assistance in responding to a major disaster or emergency," or "When directed by the President," or following "a Request For Forces (RFF) from the responsible Combatant Commander." The order further reads, "Marines with subject orders will execute orders… in order to respond to threats in the Homeland."

Things just got incredibly serious here in the United States. With widespread talk of "Civil War" potentially breaking out in America, the United States Marine Corps was issued the signed ORDER, shown below, on deploying inside the United States to assist civilian authorities in event of an "emergency."

This is the first tangible proof that people inside FedGov are extremely concerned about events taking place inside the country; and what may develop here in America.

With radicals in the US Congress attempting to undertake the IMPEACHMENT of President Trump, absent the constitutionally-required "high crimes and misdemeanors" citizens are now openly talking about REVOLT if their freely-cast ballots are negated. Those citizens are saying that the negation of their votes would be outright "tyranny" and that the Founding Fathers of this nation assured citizens were armed with guns (Second Amendment) to put a stop to any outbreak of tyranny!

At present, there are more than one-hundred-thousand SEALED CRIMINAL INDICTMENTS in the 94 federal district courts of the country; an unprecedented number never before seen in our nation's history.

There is SKUTTLEBUTT (Rumor) that many of those Indictments are of the "Cabal" that has been quietly running the country for decades. Included in that "Cabal" might be current legislators at both the federal and state levels.  If those Indictments are unsealed and a slew of current politicians find themselves being "perp-walked" they may call for an uprising. They may also get their mind-numbed supporters to do it!

There are also rumors of a financial collapse potentially happening which would see government implode on its own debt. If that took place, government could no longer fund welfare and food stamps, and THAT could also trigger widespread troubles.